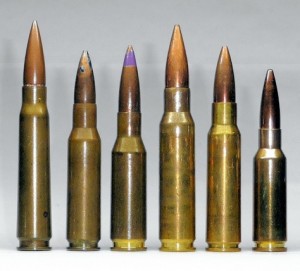 Of all the General Purpose Combat Cartridge talk that’s taken place lately, I haven’t seen it looked at from this angle before.

(BTW, I define a General Purpose Combat Cartridge as a single cartridge which is effective over the entire range of distances a soldier could engage an enemy. In Afghanistan, the enemy engaged from up to 900 yards away.  Inside 600yds is much more likely, with 800-900yds being a maximum)

I’m going to take the minimum velocity required to be lethal at 800 yards. Then I’m going to work backwards to find the required muzzle velocity.

First, a few assumptions. (that’s usually the weak point in any theory, but I digress.)

The Hornady HITS calculator gives a conservative estimate of the bullet diameter, weight and velocity required to reliably kill game. It’s not a perfect way to estimate a bullet’s lethal ability.  But should give some “ballpark” numbers to help design our general purpose combat cartridge.

The Hornady HITS Calculator can be found here

(The HITS calculator puts out good numbers, but the simple truth doesn’t line up with any formula perfectly.  My article on terminal performance & stopping power explains how bullets actually do their damage.)

Please keep in mind: 500 HITS is the minimum for deer-sized game.

Lets make our target a little higher at 450.

The military did extensive testing in the 1920-1930s to create a General Purpose Combat Cartridge.

They found that 120 grains was the minimum bullet weight for combat.  They also found bullets heavier than 130 grains didn’t make the bullet more lethal against humans. Lastly, they decided the bullet must be at least 6.5mm in diameter, and no larger than 7mm.

Below is a chart listing the required muzzle velocity to get a HITS score of 450 at 800 yards. The ballistic coefficients were calculated using G7 BC assuming a Form Factor of 1 (G7 BC = Sectional Density / G7 Form Factor)

It offers the same HITS score with much less recoil compared to all other options.  Low recoil is very important for a general purpose combat cartridge because of close quarters combat.  Low recoil allows faster follow up shots and quicker sight recovery. 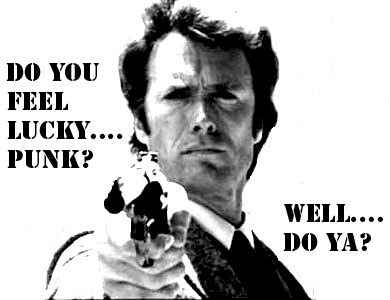 Do we agree that a .357 Magnum at point blank range is deadly?

The 130gr 6.5mm has also less bullet drop and drifts less in the wind.

A General Purpose Combat Cartridge must be effective in close quarters combat.  308’s recoil is too great for that, so it can’t be used. (we effectively have 2 World Wars, plus Korea & Vietnam proving this.  More info in my why the .308 sucks – and the military knew it article)

I think it would make an excellent General Purpose Combat Cartridge.

Let me know in the comments below.

P.S. I think you could bump the velocity up another 100 FPS and still keep the recoil low enough for a general purpose combat cartridge. But that would require some (military) testing to confirm. 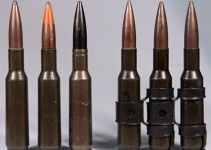