However, I’m not out to bash either of them because there’s ZERO reason to.  They are both Fantastic cartridges that allow the AR-15 to perform FAR beyond what it was originally designed for.

But they are different.

So I’m going to explain the differences between them WITHOUT any childish “my cartridge can beat your cartridge” talk.

Then I’m going to explain why it doesn’t matter as much as everyone thinks it does.

(Honest disclaimer: I like the 6.5 Grendel better, but the 6.8 SPC is an amazing cartridge)

First of all, The VAST majority of us don’t reload.  As such I’m going to limit myself to factory ammo only.

Before 6.8 fans cry foul because of the 6.8 SPCII chamber, remember that the Grendel II chamber exists, and has the exact same amount of performance increase over the original Grendel.

(Both the 6.5 Grendel and 6.8 SPC were released with less than ideal chamber dimensions.  These were  corrected on BOTH of them.  The changes allow for a roughly 100-200 FPS increase in velocity with BOTH cartridges)

That’s data only reloaders really need.  The rest of us (me included) will be buying factory ammo. So again:

I‘m comparing factory ammo only and basing performance on that.

6.5 Grendel wins in Sectional Density.  The 6.8mm bullet is larger than the 6.5mm bullet.  There’s no getting around that.

Neither cartridge does it’s best with heavier bullets though, and here’s why. 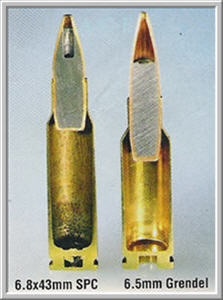 Notice how far the bullets stick into the case?  Heavier bullets are even longer, and longer bullets mean less space for gunpowder. That means lower bullet velocities.

(Someone will ask “What about the SSA 6.8 140 grain loading?” First, it requires a SPCII chamber.  Second, it’s longer than case spec at 2.300 inches vs the spec 2.260 inches.  It MUST be loaded longer than spec or the ogive will be below the case mouth)

Fortunately, Hornady produces both the 6.5 Grendel and 6.8 SPC in their SST bullet (accurate, low drag hunting ammo) so we can compare them “apples-to-apples“. 123 Grains for the Grendel, 120 Grains for the SPC.  Both velocities are out of 16” barrels. 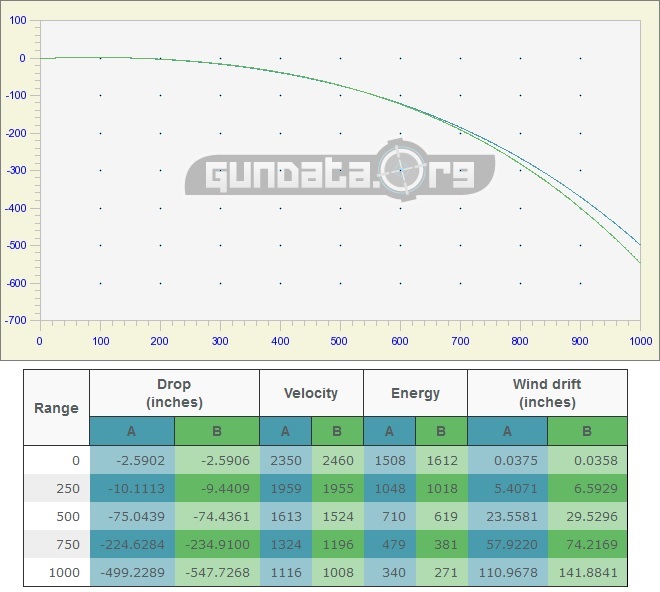 Thanks to it’s more aerodynamic bullet, The Grendel and SPC are neck and neck for a long way even with the 6.8 SPC starting 100 FPS faster.

Move the barrel lengths up, the Grendel will start to take a more significant lead…  But not enough to leave the 6.8 in the Dust. And that brings up another point

The 6.8 really doesn’t gain a lot of velocity from barrels longer than 16″ inches.  This is both a blessing and curse.  It allows great performance from short barrels.  However it doesn’t really allow you to get more velocity from a longer barrel.  (you get some, but not as much a 6.5 Grendel)

This chart shows them starting at the same velocity (the 6.5 Grendel 24″ barrel velocity, which I suspect is around the 24″ 6.8 velocity, but I haven’t found data to support that) 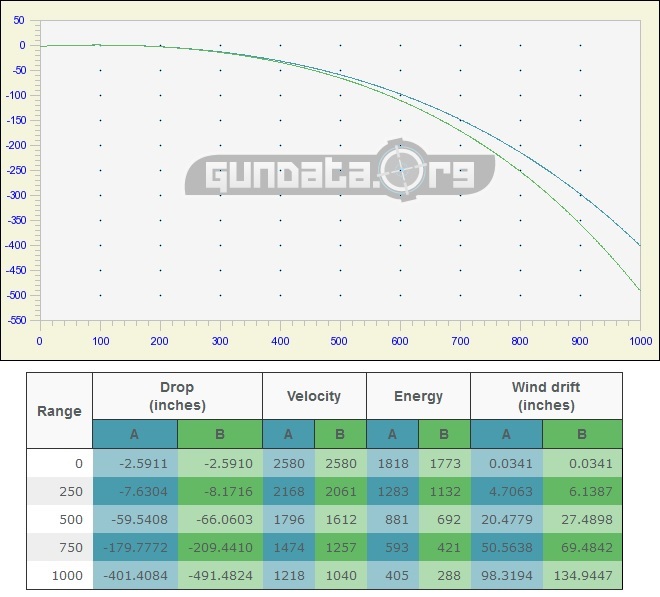 The Grendel’s lead widens a little, (about 200 FPS faster at 500 yards) but not enough to ignore the 6.8 SPC.  Most 6.5 Grendel vs 6.8 SPC loadings will have similar results. (almost identical until about 400-500 yards where the Grendel gains an advantage) 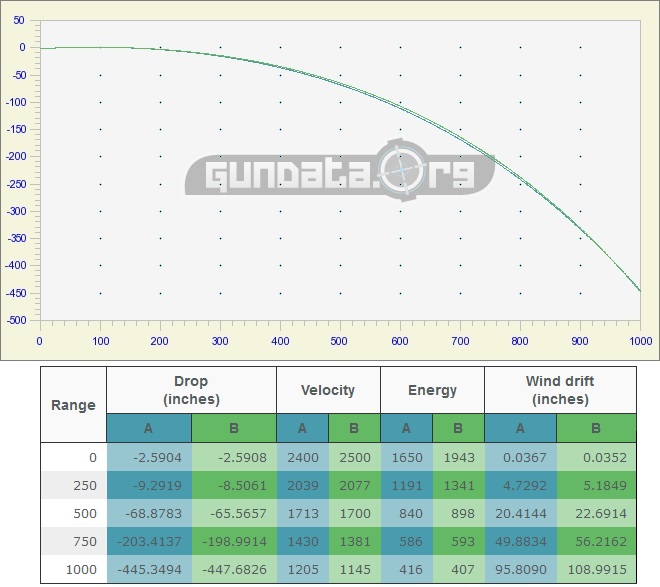 That narrows the gap considerably.  Note the trajectories are within 5 inches all the way to 1000 yards. The velocity crossover point is just over 500 yards.  Note: the 6.5 Grendel still drifts less in the wind.  (please also note that this 6.8 SPC loading requires a SPCII chamber and special magazines. The Grendel loading is in spec for length and doesn’t have a Grendel II chamber)

I can sum up all three charts like this:  inside common hunting range (20-200 yards) there is ZERO effective difference.  Let me say that again:

Inside common hunting range there is ZERO effective difference.

The only real differences show up at longer ranges.  The Grendel drops less and more importantly, the Grendel Drifts less in the wind.

The 6.5 Grendel drifts 6-7 inches less at 500 yards depending on barrel length.  Not a lot, but it might be the difference between a hit and a miss.

The 6.5 Grendel drifts up to 19 inches less at 750 yards.   That’s a huge difference in ability to land shots at long range.  Granted, that’s a long way and most soldiers couldn’t hit an enemy at that range.

In Afghanistan, half of the combat took place under 300 yards.  (where they are basically dead even)

A further 30% took place between 300 and 600 yards.  (even until 500-ish yards then slight advantage Grendel because of drop and drift)

about 20% took place between 600 and 900 yards.  (where the Grendel wins because it drifts less in the wind)

It doesn’t matter how you slice it, beyond 500 yards the Grendel has an advantage because it’s going faster, drops less and drifts less in the wind.  That’s inherent in high sectional density bullets: they are more aerodynamic.

However, the differences don’t show up until 400-500 yards, and they aren’t large.

Which brings me to part everyone misses.

Neither animals nor enemy soldiers can read the headstamp on your brass.

Both combat and hunting are about the same thing:  Accuracy. You can’t miss fast enough to win a gunfight or fill a hunting tag.

That’s why I like the Grendel better.  The 6.5 Grendel isn’t more accurate than the 6.8 SPC.  They are both VERY accurate cartridges.  However, the long, high Sectional density 6.5 mm bullets ignore the wind better and retain velocity better.

Another huge component of accuracy is practice.

Here the Grendel also has an advantage in cost of ammo.  As I write this in October of 2015, the cheapest 6.8 SPC ammo is around $0.75/round. That’s for just plain old FMJ, which is best for punching paper because it’s not effective for hunting or combat.

A little math tells me that 6.8 SPC is almost 3 times more expensive than Grendel.  Plus, that $0.28/round Grendel ammo is Wolf’s 100 grain “military classic”, which is constructed like the infamously lethal 7N6 bullet.  It’s deadly stuff.

However, don’t get so wrapped up in the “which cartridge is better” debate that you lose some crucial focus and forget an all important truth:

Your ACCURACY matters WAY more than the cartridge you pick.

I would suggest working on your accuracy because You can’t miss fast enough to win a gunfight or fill a hunting tag.

(NOTE: One of the most accurate 6.5 Grendel barrels is also one of the least expensive.  It’s made by Saturn, has the improved Grendel II chamber, a reputation for excellent accuracy, and comes with a matched bolt of very high quality.  It goes out of stock regularly, so I would grab one when you can.)

P.S. To the Grendel and SPC Fanboys:  Girls you’re both pretty.  Now can you stop bickering and move along? 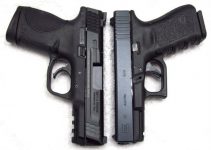 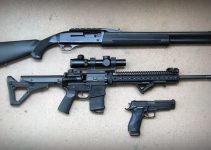